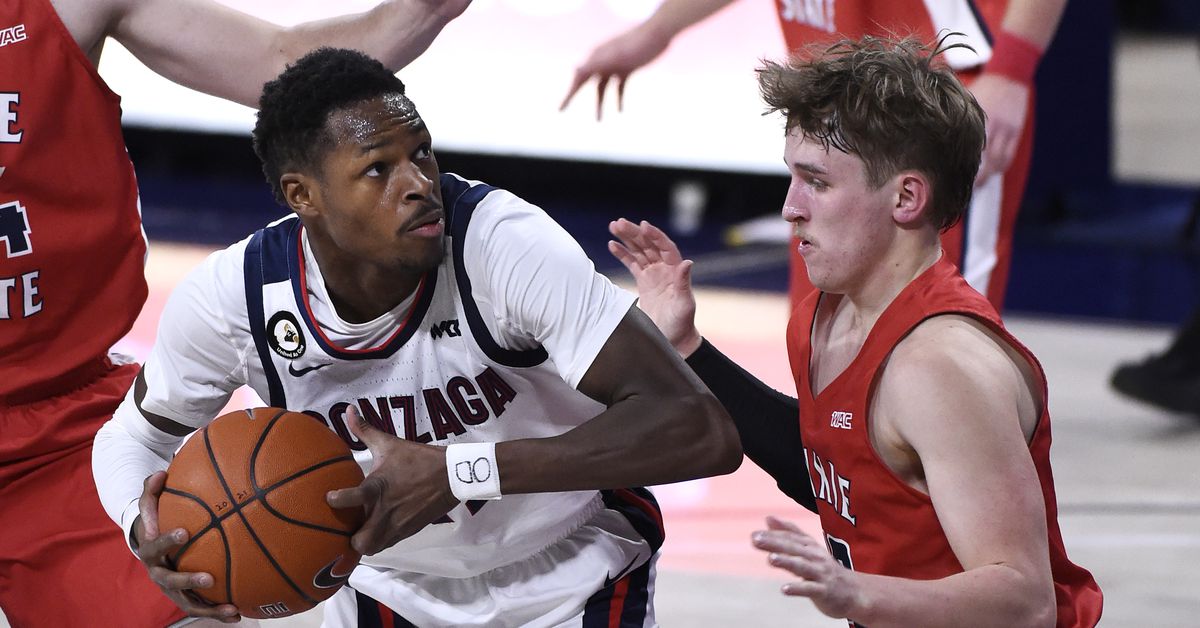 #Gonzaga closed out 2020 in dominant fashion, welcoming the #Dixie #State #Trailblazers to #Division I basketball with a 112-67 blowout.

#Joel #Ayayi was exceptional as he finished the evening with 21 points, 11 rebounds, and 6 assists, with the only thing stopping him from hitting a triple-double being #Gonzaga’s big lead and the opportunity to get quality minutes for his younger teammates. #Corey #Kispert had another big offensive performance with 25 points (4-6 3PT FG) in a shooting clinic. #Oumar #Ballo had his best collegiate game as he went a perfect 6-6 from the field en route to a career high 17 points to go with 5 rebounds. #Dominick #Harris and #Julian #Strawther also put in strong shifts with 8 points apiece, with #Harris adding 5 rebounds and 3 assists as well.

The #Trailblazers kept it competitive through the first 10 minutes of the game with clean execution on the offensive end which allowed them to keep pace with their hosts. #For a team that just made the jump up from #Division II to #Division I (though they were one of the best DII programs over the last few years), it was impressive to see them hang around with the nation’s top-ranked team for as long as they did.

#But, #Gonzaga has the likes of #Ayayi and #Kispert, and #Dixie #State does not. The veteran duo was unguardable. #Ayayi once again flirted with a triple-double, while #Kispert continued to burn the nets.

The #Zags pulled away very quickly during the final stretch of the first half and the #Lumberjacks had a front row seat to what the best offense in college basketball looks like. #Dixie #State likes to play an uptempo brand of basketball, but the #Lumberjacks were at the receiving end of a transition offense clinic from the #Zags who are the best at getting the ball quickly up the floor and putting the ball in the bottom of the net before the opposing defense can get set.

#Gonzaga continued the offensive clinic in the second half. The bench had another opportunity to play extended minutes, and took advantage, as #Ballo, #Strawther, and #Harris all flashed the qualities that make them key pieces to #Gonzaga’s future.

#Ballo played the best game of his brief career, embracing the physicality of college basketball and finishing an assortment of chances in the paint. #You can see the traits that have the fan base dreaming of what he could be after a few years with the GU staff.

#Gonzaga’s dominance even allowed an opportunity for the newest member of the team—#Ben #Gregg—to get his first taste of college basketball. #It was a few minutes where we got a glimpse even further into #Gonzaga’s future as the team took the last few dribbles of 2020.

Atleti, more leader than ever

SEE THE 2020-21 LALIGA RANKING While FC Barcelona, Real Madrid, Athletic Bilbao and Real society played their matches corresponding to the round of 32 of...
Read more
Sport

Facing the duel of Sunday at 7:15 p.m. against Deportes Iquique, the Venezuelan coach of University of Chile, Rafael Dudamel, plans to modify the...
Read more
Sport

The future of Armani in River: what his representative said

The Argentinian Diego Perotti He is experiencing a true drama, after suffering a serious injury that not only complicates his stay at Fenerbahce...
Read more
Sport

Gianni Infantino, president of FIfa. This organization and its confederations reject the European Supreliga. Free Press Photo: EFE. FIFA stated that it would...
Read more
Sport

Steven Arce, director and conductor of The Lengthen of Snail Radio, will join the team of the most traditional program in the chain,...
Read more

Coronavirus: Pfizer and the “scandal of the sixth two …

A group of cybercriminals mistakenly filters thousands of passwords in Google

Atleti, more leader than ever