The digitization of medicine boosts pay-per-use in healthcare | Companies 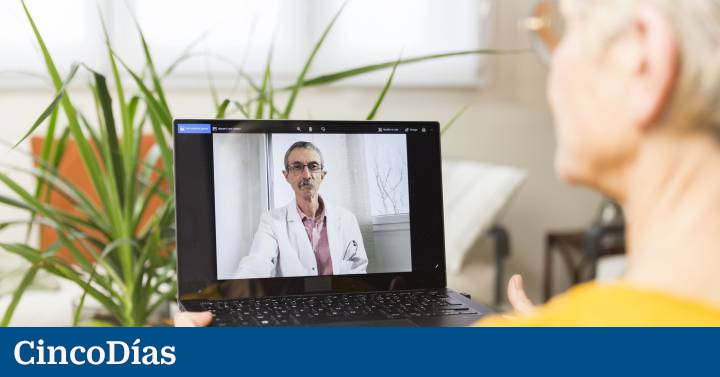 #If a few years ago it was completely unthinkable to obtain professional medical care in a way that was not strictly face-to-face, advances in digitization have brought with them a whole range of possibilities in this field. #As in many other sectors, the momentum of the pandemic and the fear of patients, or the inability to go to health centers, have caused an outbreak in remote care. #Many processes will always continue to require physical contact, but part of the consultations, whether by video call or even by messaging that allows instant access to the opinion of a health worker, can be done without going to the health center.

“The advantages of remote care are clear. #Neither patients nor professionals have to travel. #At times like this, afraid to go to a doctor, whether public or private, is ideal. #If the virus is somewhere it is logical to think that the clinic may be due to the transfer of patients. #For telemedicine, the virus has been a lever of spectacular impulse ”, says #Carlos #Falcato, CEO and founder of #Salud #On #Net, a pioneering initiative that works as a kind of online market in which specific private health services are contracted depending on what that is needed at that time.

The entrepreneur highlights that remote care is especially beneficial for certain patient profiles. “For patients with chronic problems, video consultation has been a spectacular tool because, for example, it has allowed them to go to a cardiologist or dermatologist by sending photos to make a diagnosis. The experience has been so good that users repeat. #Even when they can already go to the doctor, they take it as a real alternative ”.

#Nel #González, president of the #Spanish #Mental #Health #Confederation, also recognizes the potential that this modality has in the world of psychological care. “#We must take advantage of technology, for example, in cases of suicide risk, the person assigned to the patient has the possibility of being accessible to support them when they need it most, but we must not change seeing in person,” he warns.

#And it is that for the expert, remote care has gaps, the main one being the lack of resources. “It would have been very important if telemedicine had caught us with sufficient resources. The pandemic arrived with an absolute lack of human and economic resources. #In #European countries there are 18 psychologists for every 100,000 inhabitants and in #Spain we have 4 ”. #Another problem that it presents is that communication quality is lost. “You, as a communication professional, know perfectly well that a camera imposes a camera on any of us, even if we are very handsome and photogenic. #Imagine that you are with your doctor in front of a camera. #Imposes ”.

#In addition to the way of attending, digitization in health has had an impact on opening new ways of accessing services. #This is the case of #Salud #On #Net. The platform works as a private insurer for health centers, with which it negotiates a reduced price for access to treatment, but for the public, it allows payment per use. “The user enters the web page and selects the medical act that interests him; #You can search by price and by other people’s valuation. The service is purchased, paid by card or in other ways, and a usage code is generated that is presented at the clinic, ”#Falcato details.

#According to the founder, the platform works well in ecosystems with developed private health. #Before the pandemic, it planned its expansion in #Latin #America; The virus forced him to freeze the plans, but he is convinced that they will eventually reach the area: “Not many people have access to insurance due to their economic capacity and, nevertheless, if we negotiate the rates with the clinics, we get a price completely democratic for almost all pockets ”.

The platform is available throughout #Spain, but it has not had the same reception in all places, mainly because the degree of technological reception is not at the same level throughout the country. “Madrid, where people are used to using the smartphone for everything, is not the same as if you go to Ávila or #Toledo or to rural surroundings. #This is a spectacular alternative for rural areas, but there is a problem more cultural than connectivity ”.

#Falcato reveals that his company plans to arrive in #Mexico. “We have considered entering #Mexico. #It is a very interesting country, what happens is that it requires a large investment because it is very large. #We have thought about starting at a specific site. #It’s like when we wanted to start in the #United #States, we were not going to do it globally, but by states. #Mexico is in the spotlight and the natural thing would be to start in #Mexico #City, ”he says.

#Through a monthly subscription service of 4.99 euros, #Salud #On #Net offers the possibility of unlimited medical video consultations. The platform stores a series of patient data that allow doctors to provide personalized advice in each case. “The state of good health is not generally having good or bad luck, it is trying to maintain the best possible health as long as habits that we all know are maintained. #Control stress, sleep, diet and sedentary lifestyle. #Through our platform, this information is kept in order to diagnose these habits and provide better solutions ”, says its founder and CEO, #Carlos #Falcato.

#On whether this type of initiative is now in fashion temporarily due to the pandemic or if, on the contrary, they will last once it passes, the CEO says that in favor of telemedicine there is a very important factor: “#Once the patients they try, they tend to repeat ”.

Common medicines and their associated risks

Most of the options that offer some degree of symptomatic relief have risks and toxicities. They focus on relieving symptoms (cough, stuffy nose),...
Read more
Health & Fitness

Why cold turkey meat is not so recommended in healthy diets

The term 'stiff'refers to roasted, cooked or cured meat that is eaten cold and can be preserved for quite some time, as (more or...
Read more
Health & Fitness

Pharmacies warn of hoarding and shortages of some medicines by Covid-19 – Local, Police, News about Mexico and the World | The Sun...

The growth in the number of cases of Covid-19 in the entity is causing a hoarding excessive of medicines, such as antibiotics,...
Read more
Health & Fitness

Reduces the sale of medicine to counteract symptoms of the Coronavirus – Local News, Police, about Mexico and the World | The Sun...

Parral, Chih.- Medications such as azithromycin, ivermectin, dexamethasone, vitamin "C" with zinc and acetylsalicylic acid, are the most purchased by the public to counteract...
Read more
Health & Fitness

Vice President asks to be patient with anticovid vaccination

TO KNOW MORE How much do I save by working at home? On the website www.teletrabajo.gov.co you will find “Calculapp”,...
Read more

Former Peruvian Foreign Ministers for dialogue without sanctions against Venezuela

Patricia Tehran, 26 years after her death

Rust breaks audience records on Twitch and users on Steam

Lee and H&M partner to launch a sustainable denim collection