#Alibaba (NYSE:BABA) just boosted its current buyback plan, which will last through the end of 2022, from $6 billion to $10 billion. The #Chinese tech giant launched the original buyback plan last #May, and the higher limit seems like an attempt to placate investors as the company faces tougher challenges.

#Those challenges include the slower-than-expected growth of its core commerce business last quarter, the suspended IPO of its fintech affiliate #Ant #Group, and an antitrust probe of its e-commerce business. #Unfortunately, the $10 billion stock buyback won’t solve those issues, for three simple reasons.

#In fiscal 2016, which ended in #March of that year, #Alibaba repurchased $3.1 billion in shares. #It didn’t repurchase any shares from that program in fiscal 2017, but it bought back some of its shares from #SoftBank in separate transactions.

#Alibaba didn’t buy back any shares via its newly launched $6 billion plan in fiscal 2018. #It repurchased $1.6 billion in shares in 2019, which reduced the remaining authorization to $4.4 billion before it expired.

#In short, #Alibaba teased $10 billion in buybacks over the course of four years, but only bought back $4.7 billion in shares. #As for its current buyback plan, #Alibaba didn’t buy back any shares in fiscal 2020.

#That gap highlights the problem with buyback announcements — the company is setting aside some cash for future buybacks, but it’s not obligated to repurchase any of those shares. Therefore, raising the limit from $6 billion to $10 billion could be completely meaningless.

#In an ideal situation, a buyback program lets a company repurchase its shares at low valuations, then cancel them to reduce its total number of outstanding shares to boost the value of its remaining shares.

#However, companies also frequently use buybacks to artificially boost their EPS as their net income growth stalls or to offset the dilution from stock-based compensation. #Neither strategy helps investors.

$10 billion is a headline-grabbing amount, but it would represent less than 2% of #Alibaba’s current market value. #In theory, #Alibaba could slightly reduce its share count with its new buyback plan — but the company’s share count actually rose as it spent billions of dollars on buybacks over the past five years: 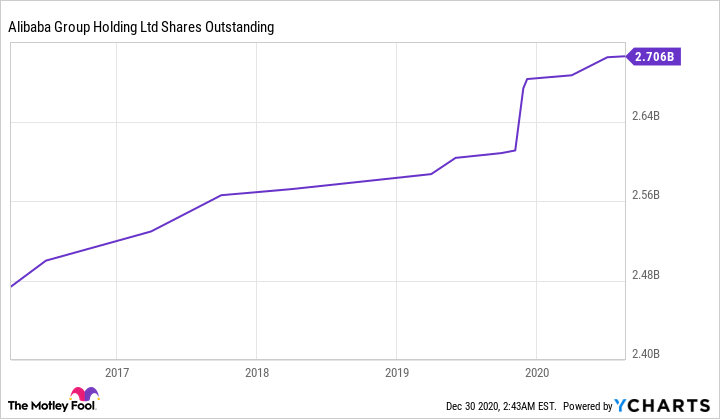 Therefore, #Alibaba likely launched its previous buyback programs to offset the dilution from its stock-based compensation, which rose steadily over the past three years, instead of reducing its total number of shares.

3. #Its cash would be better spent elsewhere

#Companies usually start paying dividends and repurchasing shares when they run out of ways to spend their cash. #As a result, dividends and buybacks are often associated with mature companies instead of growing ones.

#Alibaba isn’t a slow-growth company. #Analysts expect its revenue and earnings to rise 48% and 37%, respectively, this year, as its core commerce and cloud businesses continue to expand. #But it still faces tough competition in both markets: JD.com (NASDAQ:JD) and #Pinduoduo (NASDAQ:PDD) are resilient challengers in the e-commerce market, while #Huawei and #Tencent (OTC:TCEHY) are tough cloud rivals.

#To stay ahead of the competition, #Alibaba needs to expand its online and brick-and-mortar stores, enter new markets like video games, and expand its infrastructure. #Alibaba’s recent antitrust challenges, which mainly target its exclusive deals with merchants, could also force it to find new ways to attract merchants and widen its moat against JD and #Pinduoduo.

#Based on those facts, it doesn’t make sense to earmark $10 billion — nearly half of its free cash flow over the past four quarters — for buybacks. #Instead, the announcement seems like a knee-jerk attempt to calm investors amid a barrage of negative news.

#Buybacks work well for mature, slow-growth companies that generate lots of cash and truly want to reduce their number of outstanding shares. #Alibaba isn’t one of those companies — it’s merely trying to break the streak of negative headlines and appease antsy investors. Therefore, investors should tune out the noise and see if #Alibaba can actually solve its near-term challenges.

How much is it trading this Sunday, January 17

Fiat Chrysler Automobiles and PSA Group, which merged to create an automobile giant, are in talks with Chinese company Chery Automobile to create a...
Read more
Business

The historical retreat of WhatsApp after trying to implement its conditions

The conditions that WhatsApp did get to the devices of its users seem to take a hiatus. In this statement that reached the...
Read more
Business

The dimensions of the panel with Direct LED backlight are of 70 inches nothing less, so the space you enjoy with all kinds of...
Read more

The hard moment of Kaley Cuoco: “I feel a pain that I did not think possible”

How to give the appearance of WhatsApp to your Telegram

How much is it trading this Sunday, January 17