Home Covid-19 Despite the high numbers of COVID-19, the number of tourists returning to...
Covid-19

Despite the high numbers of COVID-19, the number of tourists returning to Miami is growing 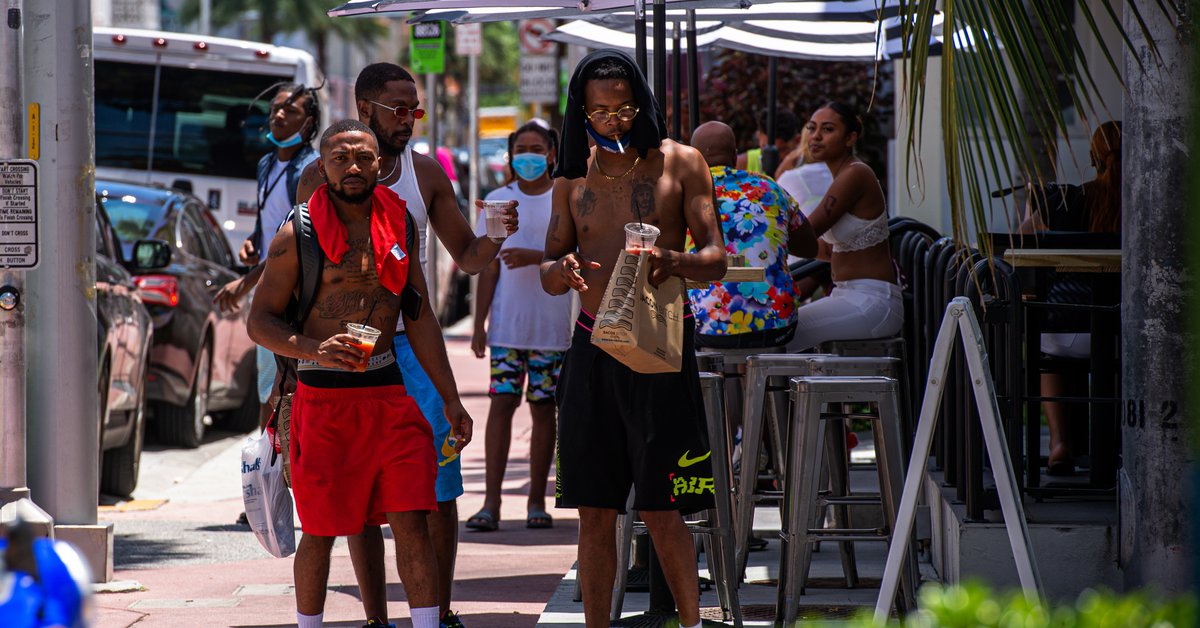 #Miami is experiencing one of the worst moments of the COVID-19 pandemic, with record numbers of infections and hospitalizations. The state of #Florida has reported an average of between 8 and 10 thousand cases daily throughout #December. #And another 12,075 were confirmed #Tuesday, bringing the number of positives to nearly 1.3 million since #March.

#Most of them have taken place in #Miami-Dade, the most densely populated county in the southern state, where the 293 thousand infected have already been exceeded, with 2,825 new cases confirmed yesterday.

#However, the high numbers do not seem to intimidate tourists, who after months without seeing each other in the city, seem to have returned in significant numbers to #Miami.

#Tourism is the main industry in #South #Florida, so its virtual paralysis during the pandemic has left a visible impact on the region. #But with the arrival of the end of the year holidays, when most of the #United #States is in freezing temperatures, #Miami’s heat seems to have been attractive to many.

#First, for the first time since #March, the streets register significant levels of traffic. The highways are loaded with cars at all hours and finding a place to park on the streets has once again been an impossible task, especially in tourist areas such as #Miami #Beach, #Brickell, #Wynwood or the #Design #District.

#But it is not just a perception. There are hard numbers that confirm the trend. The #Miami airport has received an average of 68 thousand passengers per day in the week of #December 24 to 27, with a record last #Sunday of 84 thousand in one day. The numbers are well above the average of 40,000 passengers a day seen during the previous months. #And the flow continues to grow. #Even without the numbers for the last week of the year, it is expected that every day this end of #December will see similar numbers.

The hotel industry, which has been so damaged by the pandemic, is getting a break. The latest data available from the #Miami tourism bureau and its beaches indicate that The week of #December 19 was the week with the highest hotel occupancy since the beginning of the pandemic. #Those numbers are expected to be surpassed by those of the last two weeks of #December, although the numbers are still a third of what they were in #Miami in #December 2019.

#While tourists are more than welcome in a comatose economy, authorities ask for caution when leaving. #Florida, by order of #Governor #Ron #DeSantis, does not have strict rules for those who want to leave their homes, but in #Miami-Dade the authorities continue to require the use of masks and social distance, to the point that restaurants that do not comply with the distance between tables are exposed to a temporary closure. #In addition, the county maintains a midnight curfew, which only extends to 1 a.m. for the night of #December 31, anticipating that many people will want to party.

#In turn, the CDC (#Centers for #Disease #Control, for its acronym in #English) maintains its recommendation to avoid traveling this season.

“The safest way to celebrate the winter holidays is at home, with those who live with us. #Travel and meetings with family and friends with whom we do not share a home increase the risk of contracting or transmitting COVID-19 and the flu, ”says the official CDC website.

#Florida will not honor the CDC’s suggested priorities for vaccinating its population: who will have priority in the second stage

ANDALUCÍA CLOSES All Andalusian cities with more than 100,000 inhabitants except Seville will have activated the perimeter closure from next Saturday, January 23 when registering...
Read more
Covid-19

Germany, with overflowing crematoriums, once again exceeds a thousand deaths from coronavirus in one day

Germany once again exceeded a thousand dead with or by covid-19 and 20,000 new infections in the last 24 hours, although it reported...
Read more
Covid-19

Germany registered more than a thousand deaths and 20,000 new cases of coronavirus in 24 hours

Coronavirus in Colombia: 1,956,979 infections in the country The latest report from the Ministry of Health and Social Protection, delivered Wednesday, January 20, confirmed 17,908...
Read more
Covid-19

Matías Dituro He has emerged as one of the great figures of UC in the search for the three-time championship and his level has...
Read more
Covid-19

The story of soldier Guapacho, a soldier who was saved by his armored helmet – El Colombiano