The horseshoe crab has ten eyes, has been around for over 300 million years, and we use its pale blue blood to keep us healthy.

No, it is not science fiction, just ancient science.

For decades we have needed this crustacean and its blood for the development of medicines.

And in these months of the covid-19 pandemic it is no exception: Scientists are using this creature to investigate a possible coronavirus vaccine.

As in the past, environmentalists question how medical research affects the population and life of horseshoe crabs and demand that their “milking” be stopped.

How do they help us?

These “living fossils” are important because their blood helps scientists make sure there are no dangerous bacteria in the newly created drugs, the type of bacteria that can kill people even in small amounts.

Scientists draw blood from horseshoe crabs for use in medical tests. Then they return them to their habitat.

An extract in the crab’s blood cells chemically reacts to harmful substances and scientists use it to assess whether the new drugs are safe.

And it is precisely the blood of horseshoe crab that we humans have been able to find to do this.

Each year hundreds of thousands of specimens are trapped and taken to laboratories in the United States, where some of their blood is drawn from a vein near their heart.

Then they are released back into nature.

“No one really knows the impact it has”

Initially, experts estimated that almost all the crabs survived the “donation.”

But in recent years, it is estimated that up to 30% die from this procedure.

Horseshoe crabs are considered “living fossils” because they have been on Earth for millions of years.

Other studies suggest that surviving female crabs are less likely to succeed in mating.

All of which cause environmental problems, according to activists.

“Right now, they draw blood from about half a million crabs,” says Dr. Barbara Brummer, who is in charge of a team working on nature conservation in the state of New Jersey, where many are caught in the United States. .

The horseshoe crab has for years been the only source of “blue blood” to test new drugs.

In conversation with the BBC, he says that “no one really knows the impact that blood collection has on that crab’s life” when they are returned to their natural environment.

American horseshoe crabs are now close to being officially considered an endangered species. 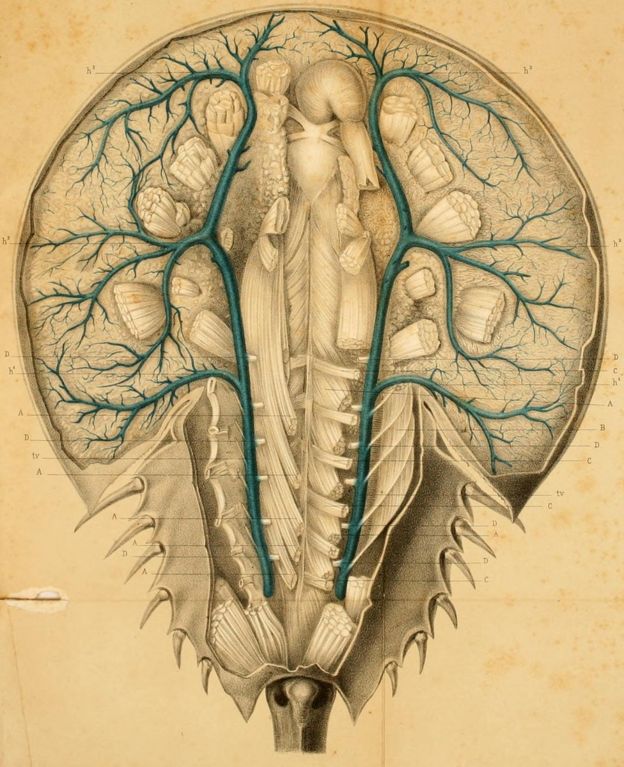 The blood of the horseshoe crab has been under study since the 19th century.

But some of the big companies that make drugs point to statistics that suggest the population has remained more or less the same for a few years.

For years, research has been done to create an artificial substance that can replace the blue blood of horseshoe crabs.

Scientists came up with an alternative that received the go-ahead to be used in Europe. Some pharmaceutical companies in the United States also joined.

So why are we talking about this now?

The ability of horseshoe crabs’ blood to immobilize and isolate pathogens was trapped in vials for use to our advantage.

Companies that want to sell drugs in the US have been told to continue using crab blood for testing.

That means any firm that may have a coronavirus vaccine will need to verify it the old-fashioned way, with blue blood, if they want to be able to reach millions of Americans.

Dr. Brummer says she is pushing for another look at the alternative substance, as it is actually being used in other countries.

“It is so that we can stop depending on this natural source,” he says.

Some pharmaceutical companies say they can meet demand for a covid-19 vaccine without having to draw blood from many more crabs than normal.

Swiss firm Lonza began manufacturing a vaccine this month – which will be tested in humans – and that “will not require more than a day of production” of blue blood, he told National Geographic magazine.

Brummer notes that there are “at least 30 companies working on a vaccine” and “each of them has to go through these tests.”

“So my concern is about the horseshoe crabs population, because they are a key part of the ecosystem.”

why members of the government parade in Center-Val de Loire

the two squatters arrested and placed in police custody

Some 20% of intensive care beds occupied by Covid-19 patients

A drink driver is fined 1,290 euros and forced labor for driving without the right

the “galley” but spectacular exploration of the Gombessa V mission

Hunting: a deer takes refuge in a construction site in Compiegne

Casablanca: Screening tests for magistrates and officials of the court of first instance

Presidential 2022: “I am more determined than ever”, launches Xavier Bertrand

Drugs: the ministry wants to expand the supply of vitamin C

Coronavirus Peru: Children can beat COVID-19 … but it should not...

LIVE – Resignation of the Lebanese government: France calls for the...

In Tukums, after a pedestrian was shot, the driver leaves the...

here are the first official images of the foldable smartphone