Protests in Peru: a clash between police and rural workers left two other protesters dead 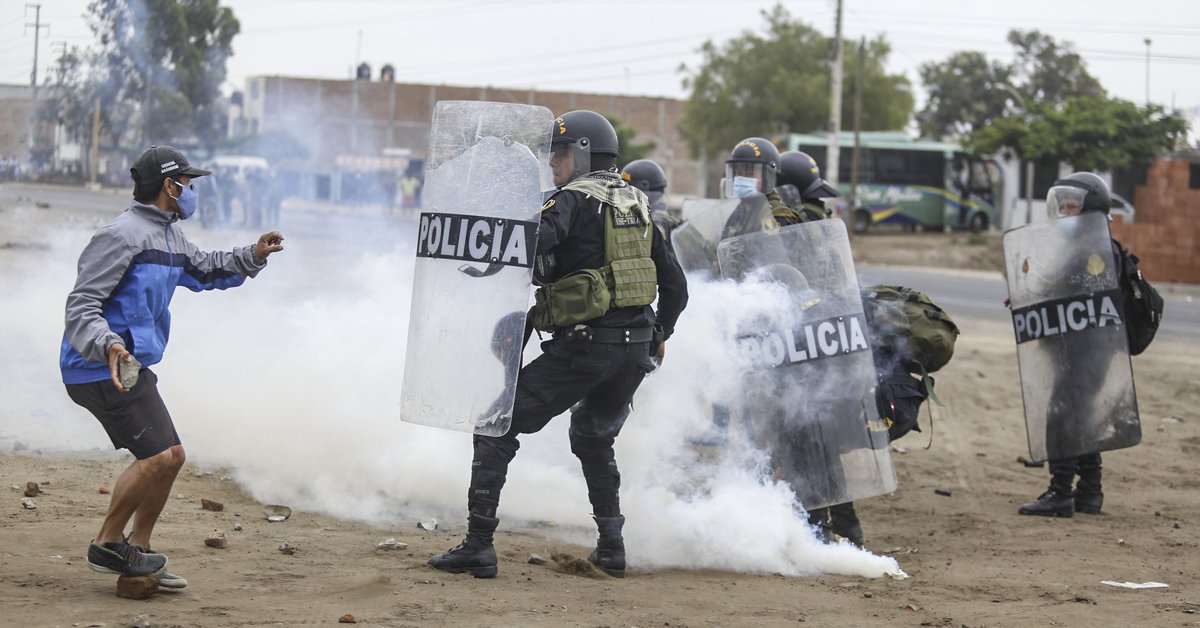 #At least two people, including a minor, died this #Wednesday in #Peru in the framework of the new worker protests of the agroindustrial sector, unhappy with the new agrarian labor regime approved the day before by #Congress, which increases the fatalities of this conflict to four.

The deceased minor was 16 years old and presumably died of a firearm projectile #In circumstances that are still unknown, during the new blockades on the #Pan-American #Highway at the height of #Virú, in the northern region of #Lambayeque, according to the congressman #Lenin #Bazán reported from the hospital. #Many activists have denounced the violence of the police repression.

A second fatality was later reported by the #Ombudsman’s #Office and identified by local media as #Reynaldo #Reyes #Ulloa, 27, who was apparently injured during the protest and died when he was transferred to a health center.

The #Defensoría demanded the #Ministry of the #Interior and the #National #Police “explanations to the country about what happened, in the shortest time.”

#Bazán, legislator of the #Left #Broad #Front and one of the parliamentarians closest to the labor demands of the workers, assured that the deaths are due to the “repression” of the #National #Police to unblock the #Pan-American #Highway, #Peru’s main transportation hub.. “#Enough! #Minister of the #Interior, I once again invoke you to take action so that the #Police withdraws and the violent repression ends. #We want peace! ”#Bazán wrote on social media.

#For its part, the #National #Human #Rights #Coordinator (CNDDHH) wondered “how long will deaths continue to occur in citizen protests due to the intervention of the #Police, and recalled that, since 2003, more than 160 people have died in social protests in #Peru.

#This latest death is added to the two already produced since the beginning of this crisis, when the blockades began to demand better working conditions.

#Those blocks didn’t stop until #Congress repealed the previous agrarian labor regime, considered “exploitative” by the workers, and were repeated last week when parliament delayed the approval of the new agrarian law.

The new agrarian labor regime was not approved until this #Tuesday, when on its last day of sessions before going into recess until #March, #Congress approved giving a bono to agricultural workers equivalent to 30% of the minimum wage, which in #Peru is set at 930 soles (about $ 257).

#This means that agricultural workers will earn from 38.75 to 50 soles (from 10.71 to 13.81 dollars) per day, but workers in the northern zone of #Peru are dissatisfied that this increase is not part of the fixed salary and, therefore, does not count towards the rest of the labor benefits as the bonus (extra pay).

#That is why the day laborers resumed the protest this #Wednesday and the confrontations of previous weeks with the #Police were repeated, where the #Riot police fired tear gas and protesters responded with stones and other blunt objects.

The situation is totally different in the southern region of #Ica, where the farmers’ protest against the previous agrarian law began a month ago and this #Wednesday the public order remained untouched.

#However, The employers of the agro-industrial sector have also expressed their rejection of the new law, although considering that the remuneration must be the product of collective bargaining and not set by #Congress. #This despite the numerous efforts to prevent unionization in recent decades, which has caused the protest to have no clear interlocutors.

#Peru’s agribusiness sector multiplied its income in recent years from a few hundred million to nearly 6 billion dollars annually thanks to products of great international demand such as blueberries, asparagus or artichokes, as well as #Generous tax breaks that were supposed to be temporary and have been going on for 20 years.

#However, workers in large companies engaged in the export of these products feel that their working conditions and wages have not improved to the same level during this period.

#In addition to the deaths confirmed so far, the protests also leave dozens of people arrested and injured by shots allegedly fired by the #Police.

(#With information from EFE)