Home Chile Friday demonstration in Baquedano: at least two detainees are registered due to...
Chile

Friday demonstration in Baquedano: at least two detainees are registered due to incidents | National 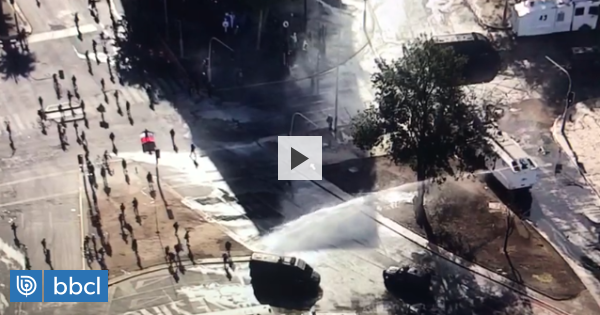 We are gathering more background on this news, stay tuned for updates.

During the afternoon of this Friday, and as has happened the last time, again registered demonstrations in Plaza Baquedano.

It was a group of about 500 protesters, who met around 6:00 p.m. in the surroundings of the monument of General Baquedano.

In the place, a demonstration took place that led to incidents, where hooded men clashed with Carabineros, destroying traffic lights and lighting fires.

According to preliminary information, so far two people have been detained.

Public Order Control personnel of the Chilean Police Department first performed a peripheral to disperse the protesters, reminding the people who were in the place that the Santiago commune is in Phase 2, so meetings of more than 50 people outdoors.

However, the people ignored the call, for which the water launchers came into action. Despite the police action, the protesters also managed to take over the Monument sector.

In addition, they displayed a large Mapuche flag.

For now, Carabineros recommended take alternative routes since the traffic is cut off.

Metro, meanwhile, reported that the Baquedano station is closed, available only to combine.

#Providencia: At the moment, the traffic is interrupted in the Plaza Baquedano sector. We ask drivers to take alternative routes. pic.twitter.com/pBCN1fvmwI

Sichel’s dilemma to get support in Chile Vamos

It was contemplated that yesterday he would officially launch his campaign team and the political structure that will accompany him in the presidential challenge....
Read more
Chile

The Chilean handball team will seek to recover from the setback in his debut, facing this Saturday Sweden for Group G of the World...
Read more
Chile

“Continuity Error”, the novel by Ernesto Garratt that recounts a Chile in a pandemic but without a key character

A look at the thirtieth date of the 2020-Chile Championship

Look at the thirtieth date of the Chilean Soccer Championship-2020, which began on Wednesday and ended this Friday:Results and scorers of the date:Wednesday:University of...
Read more
Chile

In the case of alleged corruption in the bids for luminaires that is processed in the San Carlos Guarantee Court, the prosecutor Paulina Valdebenito...
Read more

Coronavirus in Mexico: this will be the calendar for the arrival of vaccines until March 2021